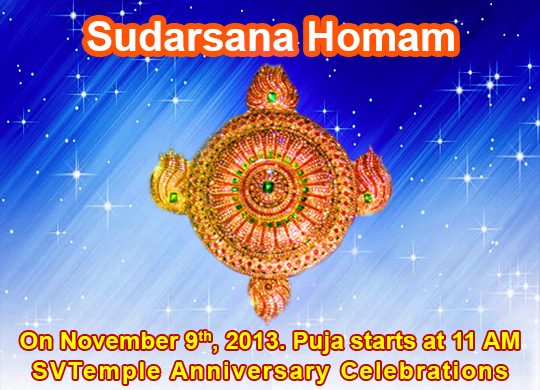 Sudarshana Homam is a common ritual performed by priests on behalf of families who sponsor this particular worship.  The priest and other elders of the household will explain that this ritual is performed to help take charge of enemies  and to be relieved of unexplainable sufferings  and worries. To get empowered with positive vibes through this Homa. It also helps stop unforeseen dangers and perils from the pathway of success.
There is a specific Sanskrit prayer that is chanted multiple times to invoke the ‘Sudarshan Chakra’ literally translated means ‘the wheel of auspicious vision’.  According to Hindu philosophy, this Disc is used by God to destroy evil. This ‘Chakra’ also has the image of ‘Yoga Narasimhan’ etched on one side. Yoga is the mental, physical, and spiritual discipline realize God. Narasimhan is the man-lion incarnation of God symbolizing his omnipresence/ omnipotent/ and omniscient presence. In this incarnation he is believed to have slain the demon king ‘Hiranyakashipu’.  This demon king apparently had acquired powers through the discipline of Yoga, and had acquired tremendous knowledge however was not able to relinquish his ego or attachment for this mortal coil. His ego had veiled his vision so much that he could not accept God as being omnipresent, omniscient, and omnipotent. The Man-Lion incarnation was assumed by God to slay his ego and destroy his evil presence on earth.
The meaning of the Mantra or chant has been attempted by many, however does not seem to capture the essence or true concept. So I am attempting to provide my explanation of the chant in italics based on the prologue provided earlier
OM Kleem Krishnaya govindaya – Invoking names of Vishnu
Invoking various names of God- Krishna, Govinda, with the primordial sound OM- which is the holy spirit present in everything and everyone. It is the force that keeps the universe in existence.
Gopi Jana Vallabhaya – Lover of Gopikas
Who is the beloved of Gopis and other people
Paraya Parama Purushaya – The Supreme Being
The Protector, supreme, soul
Paramathmane – Oversoul
The supreme spirit
Para Karma Mantra Yantra Tantra Oushada Astra Sastrani – Negative forces from Karma, Mantra, Yantra, Tantra, Magical Herbs,Weapons
Ward off the negative effects of actions, chants, machinations, rituals, medications, weapons by
Samhara Samhara – Destroy Destroy
Destroying (the darkness of ignorance)
Mruthyor Mochaya Mochaya – Liberation from death
liberating from the cycle of life and death
OM Namo Bhagavathe – I worship the Lord
Bow to God with the primordial sound of OM
Maha Sudarshanaya – The Great Sudarshanaya
Invoking positive and auspicious vision
Deeptre Jwala Paridaya – Luminous
Through the light (of knowledge)
Sarva Dik Shobana Karaya – Bright in all directions
Propagate this light in all directions
Hoom Phat Brahmane – The God of Hoom Phat
Break the egotistic attachment oh Brahman (all pervading god)
Param Jyothishe Swaha – Supreme Light, I Invoke
By engulfing the ego in the supreme light of knowledge
The essence of this chant is to invoke God through YOGA-within our cosmic mind through meditative chanting (Tapas- austerity and discipline),  and through Yagna (sacrifice- of ego in the light of knowledge) which will then enable us to choose Dharma (righteousness) through free will, to be then able donate- Dana- our resources to fulfill our God given duties in this life. The Chakra although symbolically destroys our internal base qualities that promote ego and darkness, it is also a vision that is perceived between the eyebrows as a circular light during deep meditation. During deep meditation, in the state of thoughtlessness OM is the only sound you can hear. The goal of destruction of Ego and cultivating positive vision is achieved by the blessings of Yoga Narasimhan- the all pervading, all knowing, God through meditative practice- attainable by all seekers of true knowledge.
There is a recent modern scientific research about the positive benefits of meditation and mindfulness, proving the same results as this ancient ritual.