SV Temple’s New Smartha Priest Santhosh Swamy has joined our temple on September 12th 2018 . He is trained in Shiva Aagama in Shringeri Mutt, Karnataka state and has been working as a priest since 2007. He is very proficient in Sanskrit and has a diploma in Sanskrit studies. He has studied Krishna Yajurvedam in ChamaRajendra Sanskrit college from 2004-2007.

He has performed and participated in many priestly services that includes Rudrabhishekam, Ganesh Abhishekam , Nava graha Shanthi pujas and SatyaNarayana swamy puja and a variety of Homams offered by temple to devotees.

He is available for outside pujas and at present started to do Shiva Abhishekam every Monday at temple and also introducing many new pujas related to Shiva like pradosham and UmaMaheswar vratam etc. He has also specialized in many varieties of decorations for Gods and planning to do Siva Parvathi Kalyanam during Maha Sivaratri time in 2019.

He is married and has one baby girl . He is fluent in Kannada, Sanskrit, Telugu and has working knowledge in English and Hindi. 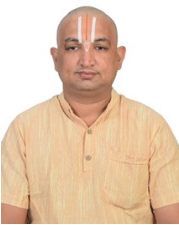 Prasanna Srinivasan  been working for the last 15 years as a full time priest  in various  temples  around Tamil Nadu and also performed  pujas as a priest  in Malaysia. He studied Divyaprabandam and Veda parayana at Bhattar Kuzham. He performed and participated in many temple events like organized veda , Divyaprabandam Goshti and kalyana utsavams , Sudarsana Homams  and other daily pujas and rituals around  temples in Tamil Nadu. He is married and has a child and can speak fluently in English, Tamil &  Sanskrit and has working knowledge in Telugu and Hindi. His hobbies – participate in carnatic  kucheris (concerts) and photography.

Priest Sri Komanduri Seshadri Swamy Iyyengar, was born in Hyderabad, India. At the age of twelve he joined in Pancharatra Agama Kalashaala (founded by Sri Sri Sri Tridandi Srimannarayana Chinna Jeeyar Swamy) at Jaggayapeta, A.P. During this school time he learnt Thiruvaaraadhana, Brahmostavam and etc… He also learnt Vaidika Smartham under the guidance of Sriman Paravastu Seshacharya a well-known priest at TTD.

Seshadri latter on joined Osmania University, and completed his Doctorate Degree, in the subject of TIRUPPAVAI. Sri Seshadri is also experienced in jyothishyam, he learnt this from a famous Astrologist Sriman Komanduri Partha Sarathy Iyyengar.