Posted August 8, 2013 by admin in Uncategorized 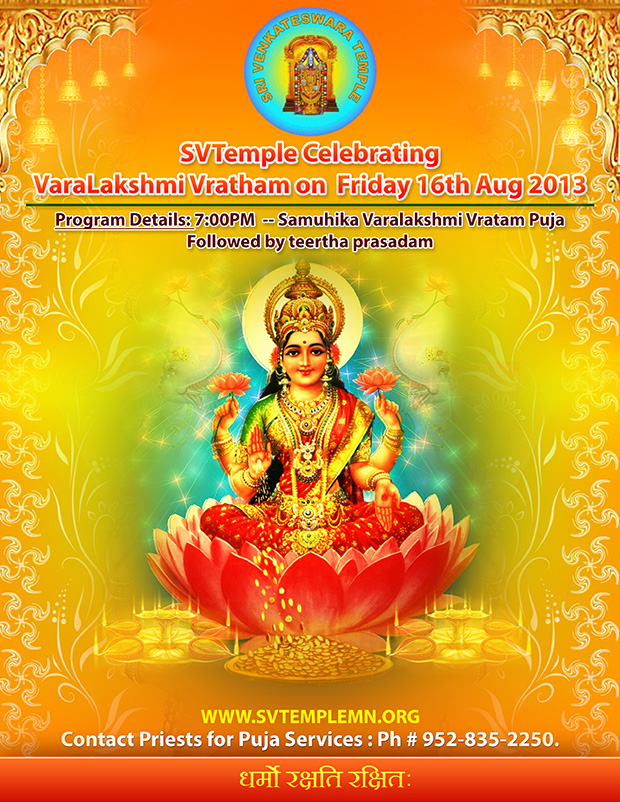 VaraLakshmi Vratham is the festival celebrated to commemorate Goddess Lakshmi, the consort of Lord Vishnu.Goddess Laxmi is the Varalakshmi, the one who grants the boon ‘Var’.

The Significance Of VaraLakshmi Vratham

In total, there are eight forces of energy. The eight forces are wealth, earth, learning, fame, peace, pleasure and strength. They are collectively called as Ashta Lakshmi. These eight forces are worshipped as lakshmi, as the eight abstract forces cannot be identified, so they are personified as goddess lakshmi. It is Goddess Lakshmi who is known as the Varalakshmi and the Vara Laxmi Vratam is also celebrated in her honor. Goddess Laxmi is a woman and it is believed that only a woman can understand the feelings of a woman. Therefore, this is a festival of women and is celebrated and observed mainly by the women. The festival of Varalaxmi Vratam is celebrated by women in order to invoke the blessings of Goddess Lakshmi to be showered on the husbands and children of these women.