Posted August 22, 2013 by admin in Uncategorized 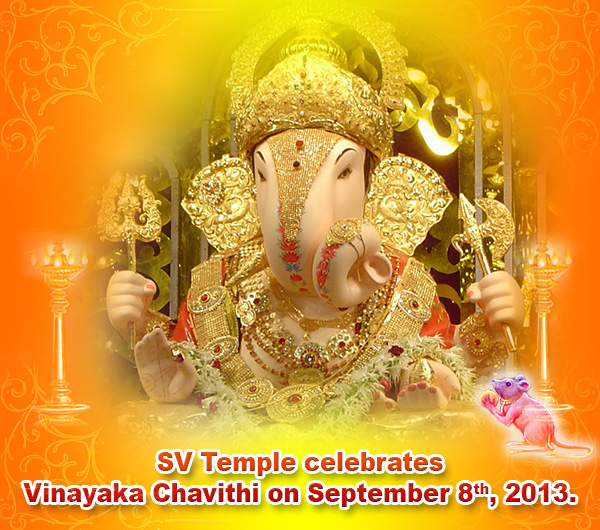 Ganesha Chaturthi is the Hindu festival celebrated on the birthday (rebirth) of Lord Ganesha, the son of Shiva and Parvati.It is believed that Lord Ganesh bestows his presence on earth for all his devotees during this festival. It is the day Shiva declared his son Ganesha as superior to all the gods, barring Vishnu, Lakshmi, Shiva and Parvati. Ganesha is widely worshipped as the god of wisdom, prosperity and good fortune and traditionally invoked at the beginning of any new venture or at the start of travel. The festival, also known as Ganeshutsav (“festival of Ganesha”) is observed in the Hindu calendar month of Bhaadrapada, starting on the shukla chaturthi (fourth day of the waxing moon period). The date usually falls between 19 August and 20 September. The festival lasts for 10 days, ending on Anant Chaturdashi (fourteenth day of the waxing moon period). While celebrated all over India, it is most elaborate in Maharashtra, TamilNadu, Goa, Andhra Pradesh, Karnataka, Odisha and Chhattisgarh. Outside India, it is celebrated widely in Nepal and by Hindus in the United States, Canada, Mauritius, Singapore, Malaysia, Thailand, Cambodia, Burma, Fiji, Trinidad & Tobago, and Guyana.

It is not known when and how Ganesh Chaturthi was first celebrated. Ganesh Chaturthi was being celebrated as a publicevent in Pune since the times of Shivaji (1630-1680), the founder of the Maratha Empire. The Peshwas, the de facto hereditary administrators of the Empire from 1749 till its end in 1818, encouraged the celebrations in their administrative seat Pune as Ganesha was their family deity (Kuladevata). With the fall of the Peshwas, Ganesh Chaturthi lost state patronage and became a private family celebration again till its revival by Indian freedom fighter and social reformer Lokmanya Tilak. In 1893, Lokmanya Tilak transformed the annual domestic festival into a large, well-organized public event. Tilak recognized the wide appeal