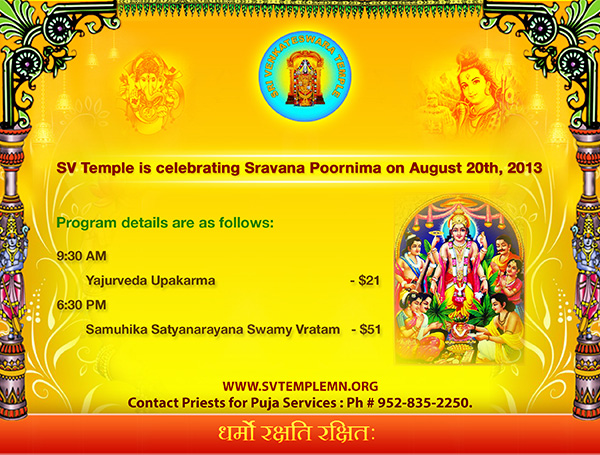 Shravana Purnima, the day to celebrate Raksha Bandhan begins with performing of puja after going through morning chores and taking bath by all the family members. The rituals performed on this day are very auspicious. “Shudikaran” ritual is performed on this day. In some parts of the India the ritual of replacing “Yagnopavit” or sacred threads with new ones is carried out.
Every person who wears sacred thread and has an inclination towards religion takes an oath of piousness and changes his sacred thread. Donation is given to Brahmins according to one’s capability and they are provided food. Lord Vishnu and goddess Lakshmi are worshipped on this day. The Worship of Vishnu and Lakshmi gives happiness, wealth and prosperity. Lord Shiva, Vishnu, Mahalaksmi and Hanuman are offered sacred thread on this day.

The month of Shravan is considered very sacred and auspicious for the very reason that, it is filled with festivals. Shravan month is mainly dedicated to the worship of Lord Shiva. Shravan Somvar Vrats are one of the most important ritual observed by many during this month. Women observe fast and offer prayers to Goddess Parvati on Mangal Gowri Vrats which is observed on Tuesdays.

Yajurveda Upkarma:
Upakarma (pronounced upaakarma) called Veda Upaakarma is one of the ancient Vedic rituals practiced to date.
The event is conducted once a year, in the month of Shraavana (mid August – mid September) and all the Brahmins follow it. The main activity performed in an Upakarma is the changing of the Yajnopavita (Yagnopavita) or the Holy Thread, Tarpanam to Rishis and Vedarambha. The day and its subsequent day are of great significance to Brahmins.
Upakarma, in Sanskrit, means “going near to and implicitly means to the teacher” and historically, the day was considered auspicious for beginning the Vedic studies.
Upakarma is a highly auspicious ceremony for the Vedic Brahmin community. The Upakarma dates in 2013 (for Eastern Australia) are August the 21st and 22nd for Gayatri japam.
It is the day the sacred thread worn by Brahmins known as ‘Yagnopavitam’ is changed. There are Brahmins who are the followers of Rig Veda, Yajur Veda and Sama Veda and they have separate dates for Upakarma. The ritual is also known as Avani Avittam in Tamil Nadu and Kerala.
Yajur Vedi Upakarma is observed on the Shravan Poornima day (Full moon day in Sawan month). Brahmins who are the followers of Yajur Veda change the sacred thread on the day. In 2013, the date is August the 21st.
Legend has it that Lord Hayagriva, an incarnation of Lord Vishnu, got back the Vedas stolen by the Asuras (Demons) on the Shravan Purnima day.
Upakarma means ‘the beginning.’ After a holy dip in a sacred river or pond or Tritha, male Brahmins change the sacred thread and wear a new one. Symbolically the ritual means a new beginning. Students also begin the study of the Vedas on this day.
Shravan Purnima is also observed as Hayagriva Jayanthi. To honor Lord Hayagriva, the protector of Chatur Vedas, Brahmins observe Upaakarma on Shravani Purnima day.

Inner meaning of Upakarma:
This day is also auspicious as the Brahmins offer libations of water to their ancestors to whom they owe their birth and to the great Rishis to whom they are highly indebted for spiritual knowledge and the Vedas themselves.