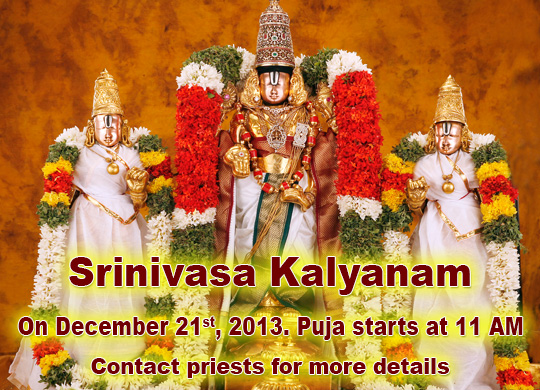 Once upon a time the rishi Bhrigu went to Vikuntha, the abode of Sriman Narayana. Lord Vishnu was reposing at that time with Mother Lakshmi and was not quick enough to greet the rishi. Bhrigu became so angry at this perceived slight done to him that he kicked the Lord on his chest, the abode of Mother Lakshmi. She was stunned and was very angry that Her husband should be humiliated thus. But the Lord got up and started massaging Bhrigu’s foot saying that He was sorry that his Kaustubha diamond on His chest must have hurt his foot. Mother Lakshmi was very furious. She said to the Lord: “How come you never think of My feelings? You may not care for being kicked but he kicked the place where I reside and thus it is an insult to Me. You, instead of punishing him, are massaging his foot. You have no respect for me or my feelings.” Thus saying She left Vikuntha and came to Earth to perform tapas.

Lord Vishnu could not bear the separation of His consort Lakshmi. So He too came down to Earth where He started doing penance. He did it for such a long time that an anthill grew on Him. During this time a cow belonging to the Chola king Thondaman started feeding the Lord by emptying her udders over the anthill. The king found about it and became furious and told the cowherd to drive the useless cow away. The cowherd threw an axe toward the cow but the Lord intervened and took the blow Himself. Blood came out of His head and as a result the cowherd died. The king came to know this and asked the Lord for forgiveness. The Lord said that in the next birth the king would be born as Akasha Raja and he would have a daughter whom He will marry. The king’s sin will be nullified by giving away his daughter to Him.

The King Thondaman was born as Akasha Raja as predicted. He did not have any progeny for a long time. After many prayers, the royal couple found a girl baby at the tip of the plough while cultivating the land. They named Her Padmavati. Padmavati was Vedavati (fake Sita) in the time of Lord Rama. Lord Rama could not marry Her then because of His Eka Patni Vratam (one wife only). So He promised her that He would marry her in Kali Yuga as Venkateshwara.

Inspite of all this foreboding, getting the divine couple was not easy. In due time, Lord Srinivasa came upon Padmavati and Her friends while chasing after an elephant. He immediately fell in love with Her and tried to express His love for Her but Her friends did not think He was worthy of their friend. They chastised Him for being so bold and chased Him away by throwing stones at Him. He became lovesick and would not eat or sleep. Vakula Devi suspected something and it pained her to see the Lord suffering in love. She managed to find out about His love for Padmavati and the rebuff by her friends. She approached the king Akasha Raja on His behalf to ask for Padmavati’s hand in marriage with Srinivasa. The king however refused to entertain the idea saying that Srinivasa had no credentials to be a son-in-law of a powerful ruler like him. However, Padmavati Herself was in love with Srinivasa and told Her parents as much but they still did not agree to the match. The Lord was desperate. So the sage Narada asked the Lord Srinivasa to go to Padmavati in the guise of a fortuneteller and tell Her that She was destined to marry Lord Srinivasa. The Lord did accordingly but the king still had doubts. He consulted Brihaspati, the guru for gods, who told him unequivocally that the match is indeed auspicious and was in everybody’s interest. The king finally consented to the marriage of Padmavati to Lord Venkateshwara.

Lord Srinivasa then had to borrow money from Kubera, the divine treasurer, to pay for the marriage expenses. It had to be a wedding fit for the kings and the gods. The mortgage for the loan was so high that the Lord agreed to pay interest on the loan till the end of Kali Yuga. The loan was granted and the money was delivered by the plane loads. The wedding was attended by all the gods who arrived on their respective vehicles in all their splendor. Pamavati parinayam was the grandest affair on the planet. The money that the Lord owes to Kubera is being paid out in installments by the devotees of the Lord. He is nick named Vaddi Kasula Vadu (one who needs coins for interest payment.) The Lord later got united with Mother Maha Lakshmi who incarnated as Alivelu Manga.

In short, Srinivasa Kalyanam is about Lord Rama fulfilling His promise to Vedavati that He would marry Her in Kali Yuga as Srinivasa. The story tells us that Mother Alimelu Manga, Sita and Maha Lakshmi are one and same while Padmavati and Vedavati (Sita’s fake image) are one and same. Lord Venkateshwara, Lord Rama and Lord Vishnu and Lord Krishna are the same also.