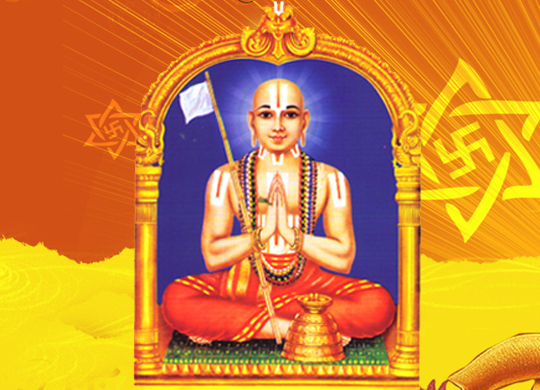 For puja Dates and Timings, Please click on the Link Below

Jagadacharya Sri Ramanuja is the foremost acharya of the SriVaishnava sampradaya. He was born in 1017 CE in the holy village of Sriperumbudur, midway between Chennai and Kanchipuram. At the command of his Acharya, and following the divine experiences of the Alwar saints, he authored the Sribhashya, the famous commentary to Veda Vyasa’s Bramhasutras, where he established that:

Through his long life, Swami Ramanuja traveled all over India and

Besides his teachings, Swamy Ramanuja did monumental services to Sriman Narayana, His devotees and His temples, especially at Srirangam, where he spent most of his time on earth. He reinstated faith in the world that the deity worshipped in the temple at Tirumala, praised in the Rig Veda and glorified by Alwars, is indeed Lord Sri Venkateswara.

Swamy Ramanuja delineated modes of worship as entailed in the Shastras, which are still followed in the 108 Divyadesams and other holy temples. He, being an avatara of Sriman Narayana’s serpent-bed, Adisesha, went back to his original form in 1137 CE. To this day, several lineages of great acharyas appointed by Sri Ramanuja continue to grant numerous devotees the greatest of gifts — A Connection with Sri Ramanuja. Sri Talapaka Annamacharya, the famous
poet and devotee of Lord Sri Venkateswara, was an ardent bhaktha of Sri Ramanuja and sung several beautiful songs in his praise, such as

Let us attend the Grand Monthly Tirumanjanam (Abhishekam) event at SV Temple, Edina of this greatest of Acharyas on the day of his birth star,Tiruvadhirai (Ardra) and attain spiritual elevation through his blessings.