Posted August 20, 2013 by admin in Uncategorized 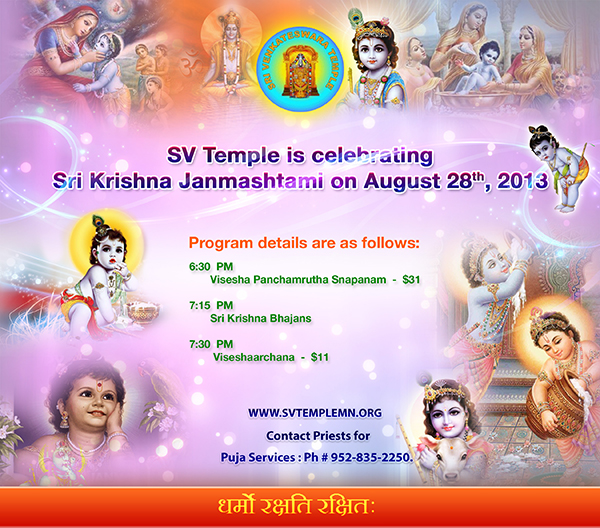 Janmashtami, the birthday of Lord Krishna is celebrated with great devotion and enthusiasm in India in the month of July or August. According to the Hindu calendar this religious festival is celebrated on the Ashtami of Krishna Paksh or the 8th day of the dark fortnight in the month of Bhadon.

Sri Krishna is considered as the one of the most powerful human incarnations of the Lord Vishnu. He was born around 5,200 years ago in Mathura. The sole objective of Sri Krishna’s birth was to free the Earth from the evilness of demons. He played an important role in Mahabharata and propagated the theory of bhakti and good karma which are narrated deeply in the Bhagwat Geeta.

Sri Krishna was born in a prison in the custody of Kansa. Vasudev, His father immediately thought of his friend Nand and decided to hand over his child to him to save Krishna from the clutch of Kansa. Krishna grew up in Gokul and finally killed his uncle, King Kansa.

The actual celebration of Janmashtami takes place during the midnight as Sri Krishna is believed to be borned on a dark, stormy and windy night to end the rule and violence of his uncle, Kansa. All over India this day is celebrated with devotional songs and dances, pujas, arti, blowing of the Conch and rocking the cradle of baby Sri Krishna.

The Janmashtami celebration of Mathura and Vrindavan, the places where Sri Krishna had spent his life, are very special. On this day temples and homes are wonderfully decorated and illuminated. Night long prayers are offered and religious mantras are sung in the temples.

The festival is celebrated on the eighth day (Ashtami) of the Krishna Paksha (dark fortnight) of the month of Bhadrapada (August–September; However, in both traditions it is the same day. So, we have works like Vishnudharmottara Purana saying Krishna Ashtami is in the Bhadrapada month and Skanda Purana stating that it falls in the month of Shravana) in the Hindu calendar. Rasa lila, dramatic enactments of the life of Krishna, are a special feature in regions of Mathura and Vrindavan, and regions following Vaishnavism in Manipur.[2] While the Rasa lila re-creates the flirtatious aspects of Krishna’s youthful days, the Dahi Handi celebrate God’s playful and mischievous side, where teams of young men form human towers to reach a high-hanging pot of butter and break it. This tradition, also known as uriadi, is a major event in Tamil Nadu on Gokulashtami.

Rajesh T: Hindu celebrate Janmashtami by fasting and staying up until midnight, the time when Krishna is believed to have been born. Images of Krishna’s infancy are placed in swings and cradles in temples and homes. At midnight devotees gather around for devotional songs, dance and exchange gifts. Some temples also conduct reading of the Hindu religious scripture Bhagavad Gita.