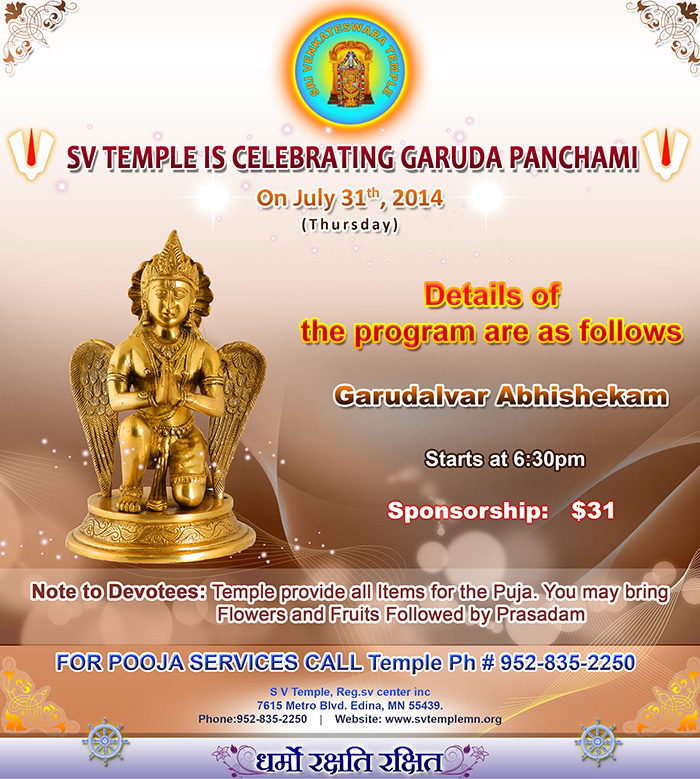 Benefits of this Pooja:

This pooja is usually performed by women and benefits their children. Garudalwar is propitiated by women who wish to give birth to bold, brave and sharp-minded children like Garudan. Newly wed couples perform this pooja for a happy married life. By performing this pooja, it is also believed that suffering due to Naga Dosham will be alleiviated.

Kaasyapar, one of the Saptha Rishis had two wives named Vinathai and Kandharu. Once, when Vinathai and Kandharu had an argument about the colour of the tail of Ucchairavam, the horse of Lord Indira. Kandharu argued that it was black while Vinathai said it was white in colour. They decided to see the horse to reslove the issue and decided that that the one who lost the argument would be a slave to the one who wins. Kandharu ordered her black snake sons and to wind around the tail of the horse, so that its tail looked black in colour. Thus, Vinathai was enslaved by Kandharu, and being a slave lived a very dejected life. When Garudan, the son of Vinathai was told how his mother was tricked into being a slave he was very angry. Garudan asked Kandharu how his mother could be free again. Kandharu asked Garudan to get the Amirtham from the Deva Loka to release his mother from slavery. Garudan, who went to Indra Lokam was stopped by the devars but fought and won over them. Before Lord Indra could use his Vajrayudham, Garudan bowed down and narrated the entire story of what had happened to his mother and why he had come to Indralok. On hearing this, Indiran gave him the Amirtham and blessed him. He also proclaimed that all snakes would henceforth be enslaved to Garudan as they were also responsible for his mother’s misery.