Posted March 1, 2013 by admin in Uncategorized 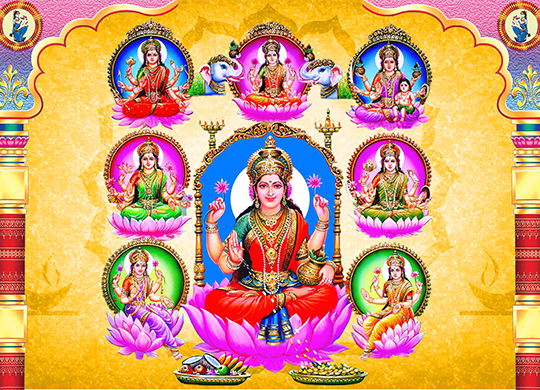 For Puja Dates and Timings, Please click on the Link Below

Ashta Lakshmi, also spelled as Ashtalakshmi (Sanskrit: अष्टलक्ष्मी, Aṣṭalakṣmī, lit. “eight Lakshmis”), are a group of eight Hindu goddesses, secondary manifestations of Shri-Lakshmi, the Hindu goddess of wealth, who preside over eight sources of wealth: “Wealth” in the context of Ashta-Lakshmi means prosperity, good health, knowledge, strength, progeny, and power.The Ashta Lakshmi are always depicted and worshipped in a group in temples.

In some Ashta Lakshmi lists, other forms of Lakshmi are included: