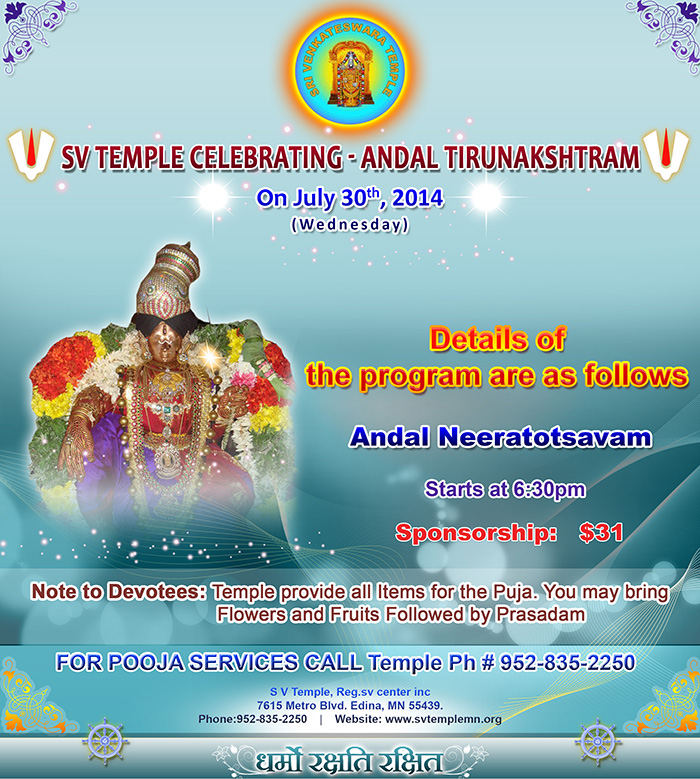 Thirunakshatram(birth date) of Andal, the divine maiden and one of the twelve Alwars (Vaishnavite saints of Tamil Nadu).Andal also known as Goda or Kothai(in Tamil) is considered an ‘amsam’ of Bhooma Devi. She is the author of the famous Thiruppavai, a Vaishnavite magnum opus.

Andal like Sita was born of the earth. She was discovered by Periyalwar (also called Vishnu Chittar), one of the twelve Alwars himself, as a young baby girl in a lovely garden near the temple of Vatabhadra Saayee (Lord Vishnu) in Srivilliputtur, about 70 kms from modern Madurai. By the time she was a young maiden, Andal’s divine romance and love for Lord Vishnu was so advanced that she decided she would marry none other than the Supreme Lord Himself. One day when investigating the presence of a long (female) strand of hair in the holy garland kept for the pooja of Lord Vishnu, Periyalwar discovered to his dismay that his loving daughter would first try the garland on herself to ensure it was fit for adorning the chest of her dark hued Lord. That night, the Lord appeared in the dream of the distressed Periyalwar and assured him that He was not all upset with Andal’s behaviour. In fact He would only wear those garlands previously tried and tested by Andal.This is how Andal earned the sobriquet ‘ Soodikodutha Sudarkodi ‘(literally one who wore the garland and then gave it to God).

Going further the Sanathana Purusha (Ancient Being or one who existed before Time) added that He will also soon marry Andal. Periyalwar’s joy knew no bounds. Lord Vishnu asked Periyalwar to bring Andal to the Srirangam temple (near Trichy) where she would get married to Him.As Andal entered the sanctum sanctorum of the great Ranganatha temple in Srirangam, she merged with Lord Ranganatha Himself and left this world to be re-united with her Divine Lord.

During her lifetime on earth, Andal also composed the famous Nachiyar Thirumozhi, continuing in the tradition of the other Alwars, who have composed remarkable hymns and religious texts, all out of the purest form of love and devotion they had for their Lord.

Andal and saints like Meerabhai in more recent periods of history are divine examples of our true selves. At our core, we human beings are blessed with a reservoir of love. This love within us is itself a mere spark compared to the infinite love the Creator has for His devotees (another name for God – Bhaktavatsala)

On this day, let us once again commit ourselves to following the easiest form of worship recommended by God Himself- total love and complete surrender to our Lord.This is indeed the only way to redeem ourselves from our earthly trivialities and to ultimately attain His holy feet.